Devastating Portrait Of The Erosion Of The Middle Class

With the nation’s economy continually on a knife’s edge, the past few years has seen the political discourse take a marked shift. Conservative politicians have started to lure voters with an image that they will tighten the wasteful spending in Washington, but for the most part, that has meant targeting social services. Indeed, healthcare, social security and other measures are seen as bloated programs that will sink the country into financial ruin if they aren’t severely overhauled. And all of this is being done in the name of supposedly preserving the middle class, but as the documentary “American Winter” argues, the entire approach is not only wrong headed, it’s only making things worse for the people these policies are supposed to protect.

Filmmakers Joe and Harry Gantz make their argument by turning their cameras to Portland, Oregan and tracking the tales of eight families, who all call the state’s 211 social services hotline, in dire need of help. And it’s eye opening stuff that not only puts a human face on the poverty crisis gripping the country (in 53 years of recorded history, a new record has been set with 48.5 million Americans living in poverty according to the latest data) but it also fundamentally shows that if there is no infrastructure in place to help those who are struggling get back on their feet, it’s actually worse for the economy.

Using a mix of hard facts and personal stories, “American Winter” makes it clear that the structures in place are simply not working. Never mind the fact that it’s actually cheaper in the long run to invest in social programs, all it takes is the story of single mother Shanon to illustrate how fast anyone can fall into hardship. When her 12 year-old daughter had to go to the hospital to deal with a serious stomach ailment that includes 5 ulcers (one of which was bleeding), Shanon was forced to take some time off work. Shanon had insurance, but of course, they refused to cover her for the time she was off caring for her daughter, and now she’s saddled with a staggering $49,000 medical bill (with more on the way for ongoing treatment). How can anyone crawl out from under such a burden? And while some might scoff that Shanon is unlucky, that sometimes that’s just the way things happen, “American Winter” suggests that the effects pass on to the next generation. 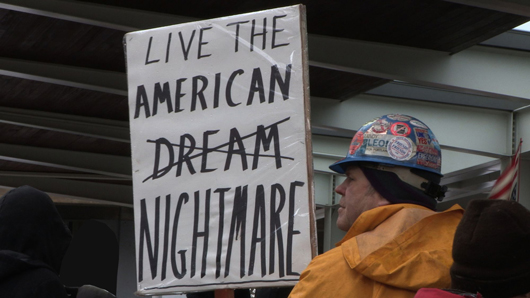 Currently, the single greatest factor determining a young person’s future wealth, is how well off their parents were. And if the next generation isn’t given a fair shot at upward mobility, how does the country expect have a healthy class of citizens who can participate in the economy? And as venture capitalist Nick Hanauer points out, the deregulated business world and the emphasis on trickle down economics that currently exists, has failed to live up to its promise. While corporations are raking in record profits, it has simply not translated into the high paying jobs that both politicians and corporate interests have said they would. Instead, we’ve seen minimum wage stagnate and full time jobs a scarcity, but as Hanauer explains the solution is simple: raise wages and create jobs, and you will enable people to buy products from your company, keep you profitable all while enabling the economy to thrive.

In case it’s not clear, “American Winter” comes from a specifc, biased and unapologetic viewpoint, but it’s also the kind of argument that’s needed right now. Watching the 50 year old John, 3 years unemployed and father to a young son with Down’s Syndrome, weep on camera because he had to borrow money from his parents to pay the electric bill, it’s bracing and raw. When Paula goes to the food bank for the first time, and is overwhelmed by the fact that her situation has forced her to take such measures or when single mom Jeanette tries make a promise to her young son Gunner that they will find a place to live, it puts a new perspective on those who are traditionally associated/stereotyped as being on social services. Everyone in “American Winter” has been working, are raising families, and doing everything they can (Dierdre gives blood and goes scrapping on weekends just for extra money) to make ends meet. They are not the vultures of the system that certain political segments like to paint as living on taxpayer money.

But it’s perhaps Bishop C.T. Wells of Portland Community Services who gets to the heart of just how far in a wrong direction things are headed. As he rightly notes, there was a time when Americans valued the fact that everyone would be taken care of. That friend, neighbor or stranger, if someone was struggling, there was a helping hand to reach out to them and it was something the country was proud of. But the rhetoric has changed so dramatically, that the compassion once inherent in the fabric of the nation’s core beliefs -- and arguably one of best unofficial exports to the world in terms of America’s identity -- has now been stripped to a mentality where everyone is left to fight on their own.

There is no doubt that “American Winter” wears its politics very much on its sleeve, and if you already side with where the Gantz brothers are coming from, it will be a sobering 90 minutes that reinforces those feelings. But even if you arrive skeptically to the documentary, the arguments are too compelling to ignore, for no matter where you stand, the remaining question that lingers is whether or not this current winter of personal, financial and even spiritual malaise from coast to coast will ever find a thaw.