As usual, Wiseman refuses to provide audiences with any contextualizing information through anything so vulgar as subtitle identification or talking-head exegesis about the institution at hand. Presumably he’s working off the fair-enough assumption that the culturally literate viewers likely to be watching this will already know (or at least know how to use the Internet to find out) something about the university’s history as a hotbed of student radicalism in the 1960s, its high-ranking academic reputation in the present day, and maybe even the economic challenges it faces due to severe budget cuts imposed in the last few years.

That last issue is given a thorough airing here, particularly in a scene where Berkeley’s then-chancellor Robert J. Birgeneau (he retired in 2013) discusses with senior staff the severe reduction in funding by the state of California. Various voices explore the ramifications of this crisis, from educators and administrators justifiably worried about how this will affect Berkeley’s commitment to excellence and public access, to teachers using the situation to stimulate political-science seminars, to poor students who will literally have less money in their pockets.

In the later hours of the docu, a protest march and occupation of the library are staged, and Wiseman wryly cuts between the passionate, speechifying students, high on the radical rhetoric they’ve just been learning in class, and the administrators responsible for handling the situation as they draft a response to an ill-considered list of demands and plan logistics in case things get out of hand. In the end, the kids all go home peacefully when the library closes and no one so much as breaks a nail. To paraphrase Bob Dylan, the times, they have a-changed. 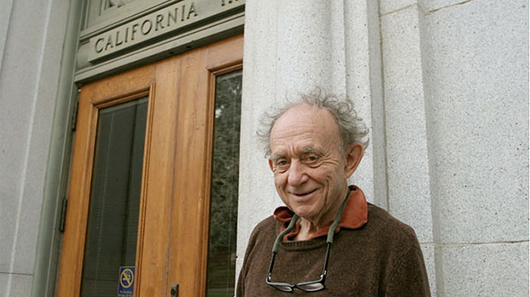 At one point, former secretary of labor-turned-professor Robert Reich schools a classroom in the realpolitik of management and policy making, and it’s not hard to see how this discussion, here and in other scenes where academics discuss organizational philosophy, is of particular interest to Wiseman. A law-school graduate himself, he’s long studied institutions and their complex hierarchies — in high schools, courtrooms, military units and theaters, among many others — providing cinematic evidence of how macro-level theory and policy trickle down to the micro level of individuals in daily conflict or cooperation.

“At Berkeley” positively brims with moments that seem to resonate with recurrent themes in Wiseman’s work, particularly when someone discusses creating time capsules to record how people really lived at a certain time. What else are Wiseman’s films but time capsules of a sort? Some viewers will complain that his films are too long, but that depth of coverage and the sheer wealth of detail it affords seals into cinema the texture of daily lives. Likewise, there’s a fascinating classroom discussion elsewhere here about how we can only think of time in spatial terms; the four hours spent watching “At Berkeley” create a unique space, building a mental geography of an educational establishment at a particular time in its history. It’s wonder, in a way, Wiseman manages to keep his films as short as they are.