Ever since I first saw Craig Baldwin’s RocketKitKongoKit in San Francisco in the late 1980s, I knew I had stumbled across a major form of alien intelligence: a heady mixture of manic inventiveness, political commitment, formal mastery and pop cultural sensibility, not encountered elsewhere on this planet. Though the lines can easily be drawn to collage master and fellow San Franciscan, Bruce Conner, Baldwin’s work is unmistakably Baldwin. Both are San Francisco anti-institutions of long standing. But Conner’s decades of imaginative leaps into the film cultural void seem classicist at this historical juncture by comparison. Baldwin’s work has a DIY down and dirty aesthetic, which never gives in. Baldwin’s love affair with celluloid is always tempered by the knowledge of its status as a disease-carrying organism—the central means by which the spectacle is disseminated. Nor does Baldwin fetishize film over video. It is the spectacle against which and in the midst of which he makes his stand. And while no one would ever confuse Baldwin’s work with that of Debord or Viénet, there are commonalities of interest in the anarchist work of demolition. The difference is that Baldwin has a genuine passion for pop culture. He never positions himself outside it, but always inside, punching his way out through the super-collision of the shots he slams into one another for the entire durational dance of each one of his films. Instead of giving up on montage because of its authoritarian past, he forces it to mutate under Xtreme pressure. 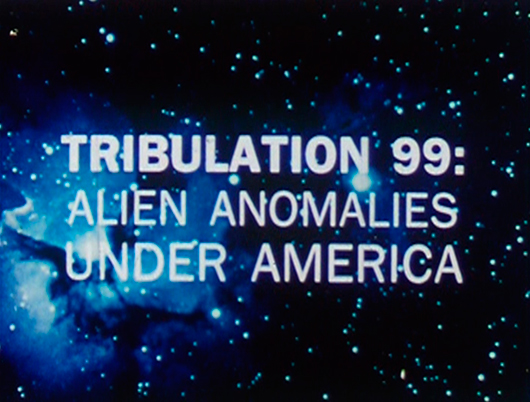 Tribulation 99 stands as one of the great achievements of political cinema of any decade. In the depths of the Reagan years—the time that irony forgot—it manages to invent a cultural strategy capable of destroying the candy-coated poison mania emanating from the White House and irradiating us through the media. Instead of taking apart the ludicrous claims of late Cold War rhetoric one fact at a time, Baldwin takes them literally at their own lying word, adding a very few imaginative constructions of his own until the whole edifice collapses of its own weight. So, instead of blandly denouncing Reagan’s paranoid imperialist adventurism as a crime against humanity and an horrific symptom of late capitalism in academic Marxian terms, the central thesis of this fun house mirror essay film becomes: left-wing political movements in Latin America are caused by interplanetary aliens living inside the earth. The effect is devastating to the reigning spectacle and indescribably delicious; a rich gumbo of the most exotic conspiracy ingredients known to several generations of tv breast-fed, acid-twisted babies.

Baldwin is one of the kings of the pirates and a firm believer in copyright violation as your best entertainment value.