Outside the realm of extremists, of which there is no shortage in the bloody Israeli/Palestinian morass, few would suggest an easy solution to anything in the Middle East. Remarkably, however, given the six different personalities and viewpoints captured in “The Gatekeepers,” filmmaker Dror Moreh has come up with a needle-sharp, profoundly humane political documentary folding the separate testimonies of former heads of Shin Bet, Israel’s secret service operation, into a brilliantly sustained argument for a different, smarter, humane way forward.

This may not be the movie Israel’s right wing would’ve commissioned. For anyone else it’s an eye-opener, made in a cool, authoritative style drawing from Errol Morris’ work, particularly “The Fog of War,” with a dose of Charles Ferguson’s Iraq invasion analysis “No End in Sight.”

Both those titles apply to Moreh’s film, which ends with the oldest living ex-Shin Bet leader, Avraham Shalom, likening Israel to “a brutal occupation force,” similar to “the Germans in World War II.” This from one of the men who, decades earlier, helped bring Adolf Eichmann out of Argentina and into a courtroom in Israel.

At the beginning of “The Gatekeepers” Moreh confronts us with a deceptive do-or-die scenario. Imagine you run the country’s secret service. You receive intel, backed up but not firmly verified by surveillance footage, that terrorists are driving a truck through a heavily populated area. Each second brings you closer to a decision — to strike or not to strike — that will affect the next chapter of history. What’s the likelihood of these really being terrorists, ready to launch a deadly assault? If civilians are killed in a pre-emptive strike, will it have been worth it? 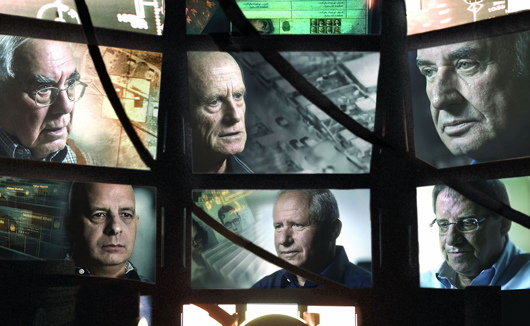 With that sobering overture, “The Gatekeepers” has you in its grip.

Each decision, each assassination, each reprisal weighs heavily on the camera subjects and, as a result, on the audience. Beginning with the Six-Day War in 1967, director Moreh charts, quickly, the Israeli occupation of the West Bank, the Gaza Strip and other regions. (Some of the explanatory footage is designed strictly to bring outsiders up to speed.) But the film never loses sight of its mission. The Shin Bet gatekeepers spill a lot of fascinating beans here, discussing covert operations, mistakes, successes — and out of it all comes a collective sense of near-futility. And yet, according to some estimates, 90 percent of the planned terrorist attacks were thwarted.”

The intelligence work is stunning, at its best, but the results to date fall so short of meaningful political progress, it’s enough to make these men rip open their souls (some more willingly than others) and unburden themselves. This is not a documentary wherein outside experts or war correspondents or “the other side” is consulted. A lesser filmmaker might’ve been tripped up by such a narrow focus. A lesser filmmaker might’ve misjudged the melange of archival footage, fabricated surveillance footage and talking heads, which Moreh handles with a blend of cinematic flash and tact.

Abbas Kiarostami’s greatest film is also, deceptively contrary to his usually poetic style, his most intellectual. The story of a real-life incident involving a con artist who posed as a noted Iranian director to receive meals and lodging from a family, Close-Up undercuts the usual eye-rolling accompanied by the phrase “based on a true story” by actually hiring all the parties involved to play themselves. Combining documentary footage of the criminal’s trial and re-enactments, no aspect of the film is entirely true, changed by the presence of the camera or the director’s deliberate staging.

Thus, it is this film, more so than the movie that prompted this comment (Ten), that could drive Roger Ebert to dismiss Kiarostami with this insult: “The fatal flaw in his approach is that no ordinary moviegoer, whether Iranian or American, can be expected to relate to his films. They exist for film festivals, film critics and film classes.” I do dearly love Mr. Ebert, populist contrarian that he can be, but I cannot fathom what would make him say such a ridiculous statement. Kiarostami makes slow films, no doubt about it. But his characters, as many levels as they operate on, are never allegorical, never a symbol more than flesh and blood. Tedious as parts of Taste of Cherry can be, who could say that its suicidal protagonist is not affecting? Who could watch the documentarian in The Wind Will Carry Us debate his morality over whether or not to linger over an old woman just so he can film her funeral and only focus on the fact that the protagonist and the director are both...directors?

That’s the beauty of Close-Up: its title communicates the cheeky falsity of the self-reflexivity, breaking the verité by using the most unnatural of framing and proximity to emphasize a person. But it also suggests Kiarostami’s humanism, a focus on each person relevant to the story, and a number who aren’t, each with his own yarn to spin. Close-Up has enough intellectual layers to power several Charlie Kaufman movies, but its underlying heart and love of art eclipses the American genius even as his most inspired. 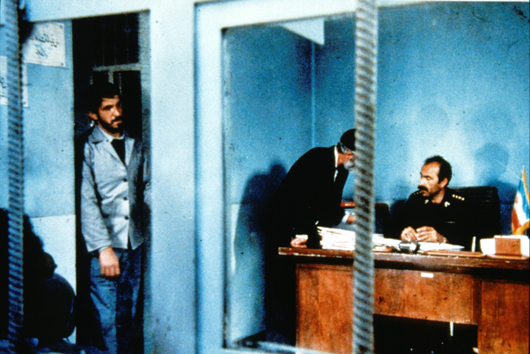 It is this appeal to art that makes Close-Up so memorable. By peeling back layers of self-reflexivity, reality and fiction without exposing a clear foundation, Kiarostami manages to intellectualize the emotional draw of art. Or perhaps it’s the opposite, dragging film studies back to the reason they cropped up in the first place: because some people loved movies so much they sought to learn everything about them. With its daring and wholly unique mash-up of Herzogian semi-documentary and open fiction, Close-Up finds the middle ground between the heady reflexivity of Adaptation and Persona and the more jubilant odes to film like The Purple Rose of Cairo. Like Woody Allen’s film, Close-Up details the power of cinema at its most pure, when people are in most desperate need for it: Purple Rose highlights the necessity of escapism during the Great Depression, while Close-Up shows us a world where art can free people from the oppressions laid upon them not by distracting them but allowing them to see their position clearly in the neorealist tradition of Iranian cinema. Kiarostami would return more to that style in the wake of this film, but his fracturing of reality allows him to see it in greater clarity than ever before, or since.

Crystallizing the director’s attempt to capture cinephilia in humanistic terms is the ending, in which he monitors Sabzian meeting his idol, Makhmalbaf, and returning to the Ahankhah home. Kiarostami places a microphone on Sabzian so he can hear the exchange as the film crew follows in a van, but the mike’s audio goes awry, dropping out and returning for a few seconds at a time. As with everything else in the film, this moment contains truth -- the idea that Kiarostami only had one take to capture Sabzian meeting his hero -- and fiction, in that many of the mike drops were added in post-production. But the gaps in sound are appropriate: there’s a respectful quality to them, emphasizing the personal nature of something as grand as film. To listen in on such a pure moment would be unclean. I’m reminded of one of the emotional high points of the original Office, where Tim throws off his microphone and takes Dawn into another room to tell her he loves her, not allowing others to hear what means most to him because some things are not the business of prying eyes. When the two arrive at the family’s house at the end, the father welcomes the real director and Sabzian, and Kiarostami freezes on the image of the fraud, smiling softly but genuinely as he appears to be forgiven, having been imprisoned and subsequently set free through the power of art. Few images are as memorable.